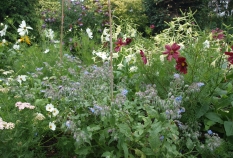 Norwood Lodge, by the Norwood Gate, was lived in by the head gardener’s wife (Doris) for a number of years. She was the last person to live there and she maintained the garden.
The aim of the BPCP Biodiversity Group is to create a cottage-type garden, using the kinds of flowers that would have been common in gardens in the early 20th century in order to provide forage for pollinators and to improve the habitat for them and other invertebrates. Ultimately we hoped to encourage sparrows to live around the Lodge but they seem to have heard about the plans because a small number have already settled in.

The ground has not been cultivated for more than 20 years and is heavy clay so in the first year we have planted mostly annuals, which will be removed at the end of the season, allowing the ground to be dug over again and improved before winter. We are grateful for the Community Payback people for doing the first, very hard, manual dig of the ground in the right hand bed.

At the moment the planting is largely of Nicotiana (tobacco), Cosmos, Achillea (yarrow) and Rudbeckia but we have included a few Amaranthus (Love lies Bleeding), borage and hollyhocks. A few poppies, seeded from the poppy display in 2014 have also put in an appearance.

On Saturday we noted a large  number of honey bees, hover flies and a few bumbles as well as some Large White butterflies, a Comma and a Gatekeeper.

The recent rain has given the biodiversity team a watering holiday and has much improved the life chances of a number of small bushes along the Norwood Road railings.

Norwood Lodge circa 1900’s.  It was lived in at the time by a park keeper and his wife. It is now a community centre for all the park’s stakeholder groups. The update and conversion were undertaken by the HLF in 2012 and a fence area of garden was agreed so that we could work on projects to enhance Brockwell Park.

Last year many of you may have seen the WW1 commemorative project that we installed with funding from Lambeth.  Since the Lodge didn’t have a permanent garden we took the opportunity to join Lambeth’s WW1 borough wide homage to the First World War.

It was dismantled, in September and we began work on the new cottage garden to reflect the old postcard picture above. We began with digging over the soil several times as it hadn’t been a proper garden for many years and had acquired a vast seed bed of weeds.

The Conservation Volunteers, led by Tom Nandi, arrived in November to dig out concrete in the back area; put up trellis on the container, plant shrubs along the fence line and put some grass seed down.  Then we started work on the front garden in February this year.  Our idea was to plant an invertebrate friendly garden full of old fashioned plants that would encourage our moths, beetles, ladybirds and spiders, as well as bees and butterflies. Some of the Flanders poppies re-seeded themselves on the border of the newly installed fence.

Before planting we dug everything over twice more with the help of the Community Payback team – and our thanks to them for all their help, pruning, watering etc. We had made arrangements with the Brockwell Park Community Greenhouses for them to grow some annuals from seed so we were able to plant out Cosmos, Violas, Achillea, Amaranthus, Nicatonia, Borage and Rudbeckia.  We also had some Sisyrinchium that had survived from the old garden.  We also planted out the three Sambucus Nigra that had been the centre pieces of the circular WW1 beds at both Herne Hill and Tulse Hill entrances.

There are a number of Buddleia trees and we have re-sited some so that we have them where they can be seen when the butterflies arrive.  The project will take about five years to truly become a cottage garden but we have begun! 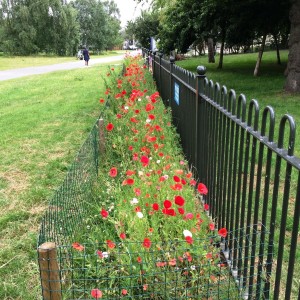 The second part of our contribution to Lambeth’s ‘green corridor’ was over by the Effra Early Learning Centre.  In 2015 we completely dug over the 72 foot long patch and then sowed mainly poppies.  The installation shares a set of railings with the Centre and so we have to be careful to respect that boundary.  We went for a ‘pop’ of colour that is framed by the railings and the trees behind.  We were able to put up a small green fence through the donations received from Brockwell Park Community Partners and Friends of Brockwell Park. The Trust Community Volunteers manager, Richard Jedrzejczak sourced the fence, and came with the team to install it in March.  Now we have a wonderful display of multi coloured poppies that provide a much needed source of nectar and pollen for the bees and butterflies you can see there.

This was our fourth year for this installation and the first wildflower area we created.  It almost happened by accident!  Blakedown Services had renewed the big pipe that lay beneath the ground in the area and so in October 2010, we sprinkled poppy seeds along the furrow that was left.  Imagine our surprise in March of 2011 – when an army of small poppies emerging! So after some negotiation about how to look after the strip – we were allowed to keep it for that year.  They came out as the new playground was opened and received so many compliments that with a slight re-sighting to the front of the Effra fence – it has remained ever since and gave us the confidence to tackle the 600 square meters of the wildflower slope at the Lido.

One of the highlights in the Brockwell Park calendar has recently become the brilliant lido wildlife slope. 2015 is the third summer in which the wild flowers have added a rural look to the lido front. Jason Cobb, Brixton Buzz, June 11, 2015

This year the slope had some setbacks but it seems to have a spirit all of its own and voila! It rose from the grey sludge of winter like a butterfly from a chrysalis.

It was such a blow in September 2013, to have found the Himalayan Balsam during the last season (this is a DEFRA listed weed nuisance) this obligated us to glyphosate again because of its propensity to spread.  This year (September 2014) however there was no sign of it and we could go ahead without glyphosating.

So in October 2014, Vinnie O’Connell and his team came to strim down the last of the flowers, it took us 3 days as we were not great experts with the strimmer’s! We left the flower seed to set, and then raked the dead stalks off three weeks later.

The slope then was left fallow for the winter.  As it was exceptionally wet, when the Trust Conservation Volunteers, led by Tom Nandi, came to rotivate and weed in February, it was really hard going.  The rotivating day was one of almost relentless rain and bitter wind.   Some parts toward the far end of the slope were impossible.  Tom did what he could and we hoped for the best.  When I lookout out on the grey churned up piles of mud in March I was filled with doom.  But we put down the extra seed we had collected the previous summer.

Gradually the slope started to ‘green’ and the first real surprise was the wonderful spread of Campion that bloomed in white, pale pink and a darker pink.  Then came the wild marigolds and the Californian poppies.  The buttercups, chamomile, poppies, corn cockle and cornflowers were next to bloom.  Another surprise is the tiny wild geranium and the purple and yellow clumps of vetch. We have Cecilia, Love in a mist, Toadflax, Scarlet pimpernel and some wild grasses that we added. We are now trying to getting a good mix of grasses and wildflowers.

We also have all the thugs of the urban jungle!  Teasel, thistle, creeping buttercup, couch grass, fat hen, dock, and this year’s most prolific – the wild mustard.  All of which we want in small numbers as they offer something to the invertebrates such as ladybird larvae, moths, beetles etc. but the trick is to manage them.

Many people joke about this being a ‘wild slope’ when they see us carefully cutting out a number of each of the above each week.  But we prefer to call it ‘managed wildness’.

Thanks to The Heritage Lottery Fund and Trevor Uprichard who facilitated the funding to 2014/15; Vinnie O’Connell, founder of New Leaf Dulwich; The Conservation Volunteers with Tom Nandi; The Brockwell Park Community Partners for the funding for 2015/16 – which secures another year of maintenance for the Wildflower slope.

We will be selling the wildflower and poppy seed, plus some cards of the wildflower slope and the popular tree towels at the Lambeth Country Show – all the proceeds go towards community events and projects in the Park. There is an ongoing requirement to maintain the wildflower slope which requires funding, and buying in extra seed from a wildflower specialist as we have to introduce new seed to keep the continuation vigorous.

Check out this great article and pictures from our colleague Jason Cobb at Brixton Buzz.